Are You Really Bad at Sports, or Are You Just a Girl?

Меньше Больше
1 мес. 3 нед. назад #199 от Ustina Molyanova
Being a female athlete is both challenging, competitive, and exhausting. Fighting for success in an industry that’s heavily dominated by men can be extremely discouraging, but also rewarding in the long run. To empower women in sports and athletics, women around the world started to implement and spread positive reinforcement while rooting for gender equality in sports.
This issue is surprisingly receiving a lot of support especially in industries surrounding basketball and football. Figures like LeBron James and Chris Paul, who are professional basketball players, have continuously supported the WNBA (Women’s National Basketball Association) by showing up and supporting women and their careers. Media coverage has also picked up and on famous tennis players such as Serena Williams and Naomi Osaka, while supporting and congratulating them on their achievements.
It brings immense joy and hope that multiple groups of people are starting to pay attention and support women in this challenging industry, however women that are pursuing their dreams still come to battle with daily inequality. Nonetheless, the good news is that supporting women in sports is also a way to simultaneously promote equal economic opportunities for all genders. One of the main issues that women face from the standpoint of their career is that they get paid significantly less than male athletes. Did you know that the average salary of an NBA male basketball player is 7.7 million dollars, while the average salary of a WNBA female basketball player is only 75,000 dollars? This indicates that there is a huge gender pay gap – and we see it in full effect in the professional basketball industry.
Obviously, battling the gender pay gap is a global complex problem that is rooted into the socio-economic systems that are embedded into our lives. However, there are multiple small ways through which you can show your support. One of them would be to simply watch female athletes as much as you watch male athletes. By following female sports pages, athletes, tournaments and other organizations, you are not only supporting them, but also convincing other people to support them as well.
This is what happened with LeBron James and the WNBA. When James started to use his platform to support female basketball athletes, other people started to follow his steps and do the same. Eventually, it turned out that celebrities, influencers, athletes and some of the general public even started to show up to female basketball games to support the industry. All of this happened because of one person. This ultimately indicates that supporting a cause which you are passionate about doesn’t only help the community, but it also motivates others to follow your footsteps and do the same.
#womeninsports #genderequality #genderpaygap #playlikeawoman #empowerwomen 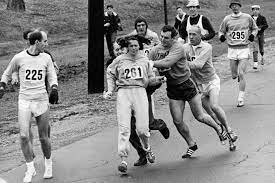